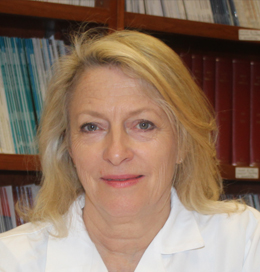 Dr. Anne Bowcock is currently a Professor at the Icahn School of Medicine at Mount Sinai in New York within the Departments of Oncological Sciences and Dermatology, and a secondary appointment in the Department of Genetics and Genomic Sciences. Before joining Mount Sinai in 2017, Dr. Bowcock served as Professor and Chair in Cancer Genomics at the National Heart and Lung Institute, Imperial College London. Previous appointments include Washington University Medical Center in St. Louis, where she served as Joint Director of the Division of Human Genetics, and several research and academic positions at University of Texas Southwestern Medical Center.

Her laboratory was the first to identify the genes (BAP1 and SF3B1) leading to tumor formation and metastasis of uveal melanoma. She also identified the first gene mutated in a familial form of psoriasis and psoriatic arthritis (CARD14) and determined the functional consequences of its psoriasis causing mutations. Her other research achievements include demonstrating the use of DNA markers in reconstructing human evolution, identifying proteins interacting with the early onset breast cancer gene BRCA1. She continues to work on the genetics and genomics of cancer and skin diseases including psoriasis and keloid formation. Dr. Bowcock earned her B.Sc. Honors Degree in Genetics (First Class) and Ph.D. from the University of Witwatersrand, Johannesburg, South Africa. During her tenure as a postdoctoral fellow in the Department of Genetics at Stanford University, she played a role in mapping loci for cystic fibrosis and Wilson’s disease and used DNA markers to examine the relationship of human populations.

Dr. Bowcock has received numerous awards in recognition of her research, including a Psoriasis Achievement Award from the American Skin Association. She is the inventor of two patents and has published more than 240 scientific papers, books, and book chapters.