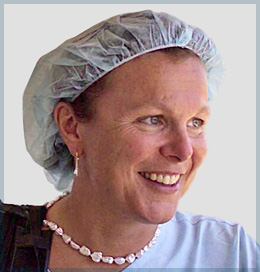 Winthrop Professor Fiona Wood is a Plastic & Reconstructive Surgeon specializing in the field of burn care, trauma and scar reconstruction.

Professor Wood is the Director of the WA Burns Service of Western Australia and a Consultant Plastic Surgeon at Princess Margaret Hospital and Fiona Stanley Hospital. Her research through the Burn Injury Research Unit UWA and the Fiona Wood Foundation is focused on scar-less healing.  In bringing basic science to the bedside the aim is to build a unique capacity to facilitate direct research collaborations between researchers and practitioners across basic science, population health, clinical care and clinical outcomes.

Professor Wood has also been involved in a number of education and disaster response programs associated with her interest in burns and has presented and published a variety of papers over the years.   In October 2002, she was propelled into the media spotlight when the largest proportion of survivors from the 2002 Bali bombings arrived at Royal Perth Hospital. She led a team working to save 28 patients suffering from between 2 and 92 per cent body burns, deadly infections and delayed shock.

Professor Wood was named a Member of the Order of Australia (AM) in 2003. In 2005 she won the Western Australia Citizen of the Year award for her contribution to Medicine in the field of burns research. That same year her contribution to burns care was recognized through Australia’s highest accolade when she was named Australian of the Year for 2005 by Australian Prime Minister John Howard at a ceremony in Canberra to mark Australia Day.  She is an Australian Living Treasure and voted the most-trusted Australian in a Reader’s Digest poll for six successive years from 2005 to 2010.